Why I won't be rushing to do another Marathon!

Just over two weeks ago I managed to complete the SHINE Manchester midnight marathon walk. It may have taken a little longer than expected ( almost nine hours) but I bloody did it!  NEVER, EVER, AGAIN though! Phew! Walking 26.2 miles amongst the drunken streets of Manchester City centre, when you should be snuggled up in bed pulling the Zzz in, is no easy feat.  I've been left with puddings for feet, two black toe nails that are hanging on by a thread and a killer kidney infection that has floored me for nearly two whole weeks!

We set off at 9pm from Manchester Uniteds old Trafford ground amid an electric atmosphere and we nailed the first ten miles, but I hit a wall at mile sixteen, I didn't think I could get passed it, yet surprisingly I pushed through and by mile twenty I was feeling as fresh as a daisy.  Then disaster struck, at mile twenty one my ginormous blister on my right heel popped and I feared it was all over.  I managed to hobble for the remaining 5.2 miles in sheer pain and was elated when I crossed the finish line, but I have to say I didn't feel any huge sense of accomplishment like I'd envisioned, just exhaustion and anti climax.  Yes we raised a commendable amount of money for Cancer research, a cause close to my heart, but I could have raised the same amount of money doing something decidedly more enjoyable and dare I say it easier.


Next time I think I'll arrange a sponsored silence or maybe a singathon, I'll leave the marathons and physical exhaustion to the professionals, and conserve my energy. How people actually run that many miles in just under half the time that I managed to walk, and enjoy it, it is beyond me....you deserve more than a medal people, but rather you than me!

An evening with Jacqueline Wilson 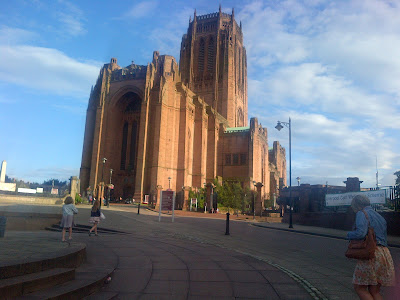 Sorry this post is about a week late but it's the last few days of the summer holidays and my brain is officially fried; roll on Monday because school can't come quick enough, even if that does mean back to work for me!

So last Wednesday I took Mia, along with my friend and her daughter, to meet her favourite author and idol children's writer Jacqueline Wilson.  The evening was held at Liverpool's Anglican Cathedral, which has to be one of the most beautiful buildings I've ever had the pleasure of visiting, it's simply stunning. 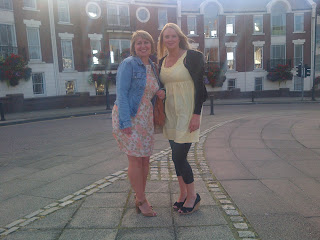 We made the most of our grown up evening out by dining in a lovely Italian Restaurant on Bold Street before making our way to the cathedral.  The girls had a wonderful time and during the brief Q&A session at the end of the event, Mia was lucky enough to get picked to personally ask Jacqueline a question of her choice.  Mia asked her "If you could choose your own birthday present what would it be?" I was so proud of her, especially when Jacqueline Wilson said what a brilliant and different question that was ( everyone else had asked the same questions "who is your favourite character?" and "which of your books is your favourite?")

Mia was thrilled to learn that Jacqueline would wish to visit Liverpool's Walkers Art gallery (Mia's favourite place) to  look at the pre-raphaelite collection and then purchase a poster of her favourite from the gift shop as her birthday present. 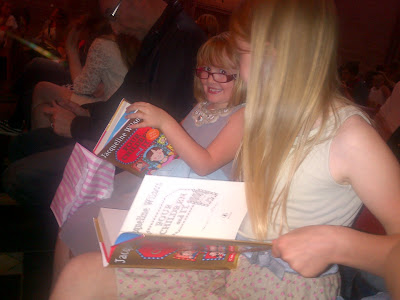 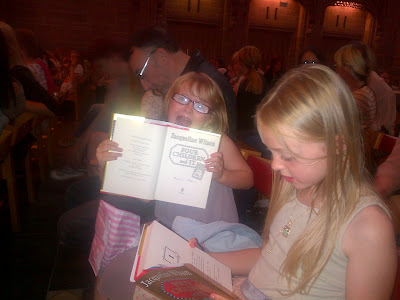 Here are the girls enjoying their very own signed copy of "Four children and It".
Posted by The wife of bold at 15:05 No comments:

Can you believe it, we won £500 in the #ColourMeInRK Kellogg's competition over at BritMums.

I couldn't believe my luck when I stumbled upon the email to congratulate me on my win! The kids were happy enough with their marvellous colouring pens and massive box of rice krispies so the fact we actually won was unbelievable.

Back when we first entered I made a promise to each of my girls that if we were lucky enough to win the cash prize we would split it five ways, never thinking in a million years we actually would win, so you can imagine how excited they were to learn they were all £100 richer.
I've spent my £500 win five times over in my head already, I was hoping to kit the girls out in a whole new wardrobe from Zara and River Island.......

Mia wants to spend her money on the latest boy craze, and I must admit I'm glad its not another Barbie doll, this house has seen enough glittering pink fluffy dolls to last it a lifetime.

The other girls are keen to head down to the toy store and blow their winnings too,  so I think their dream wardrobe will have to wait for a while.

The good news is I'm still left with £100 to spend on myself!  I've already coveted a matching Trench coat...

Only £29.99 from H&M!! That leaves me with some cash left over to sort my horrendous hair out! 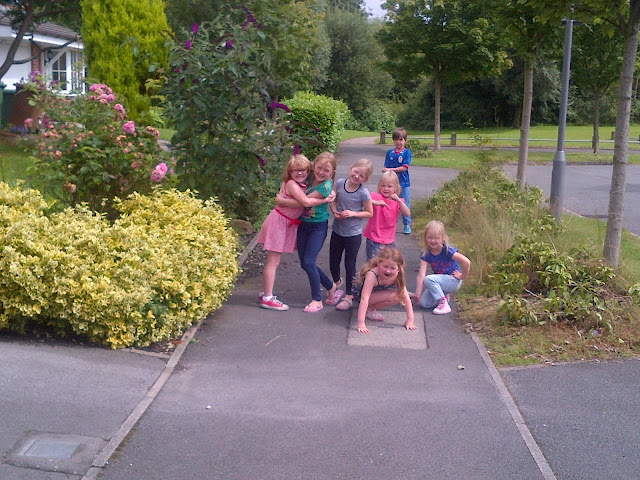 Well week two of the summer holidays is nearly done and dusted and what better way to celebrate than with an Olympic Party.  I decided to host a mini party with only seven attendees as my stress levels are through the roof already;I've upped my daily wine intake to two bottles and I just hope that with each progressing week I wont need to add to my self medication dosage. Imagine, by week six I could be needing six whole bottles a day!

After plying the kids with excessive amounts of sugary treats we started things off with some track and field events. We assigned each child to a specific country, trying to explain that not everyone could be on team GB proved rather trying but we got there in the end. However as hard as we tried we couldn't get any takers for Kazakhstan. The girls didn't quite master the art of Javelin, I suppose the gale force winds didn't help, they didn't fare much better with discus (AKA Frisbee) either. 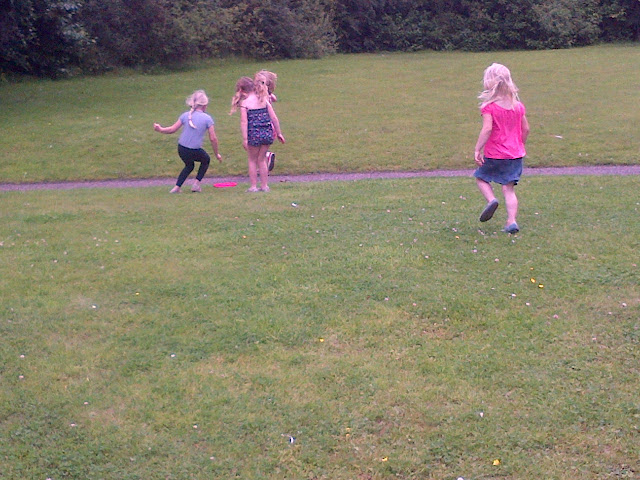 Any half decent Olympic Party just wouldn't be worth its salt if it did not include the obligatory egg and spoon race. 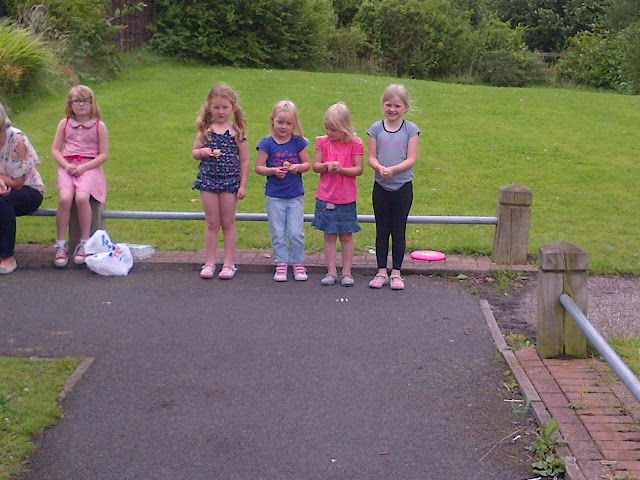 This was by far the most popular track event...hmm wonder why? 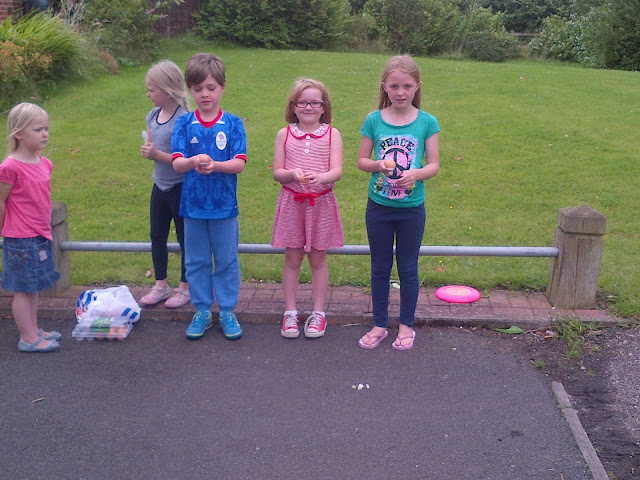 Of course there was inevitably a few eggy casualties ......... 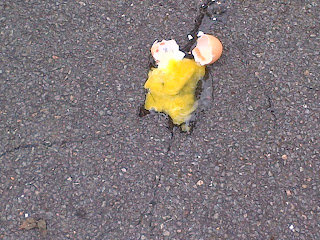 Next up was some face painting and tattoos followed by some  party food to keep our mini Olympians fuelled up. 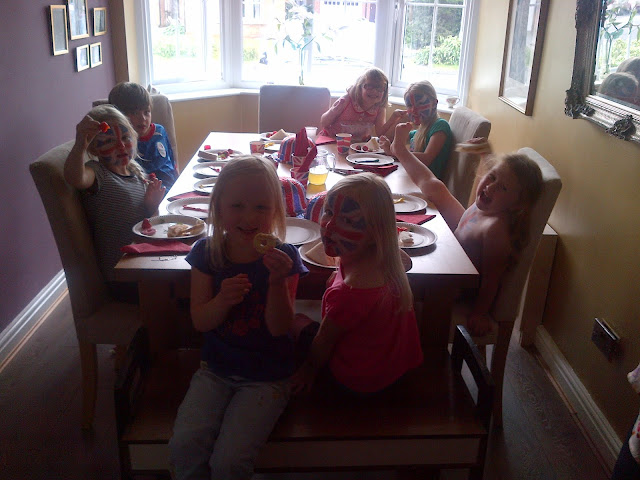 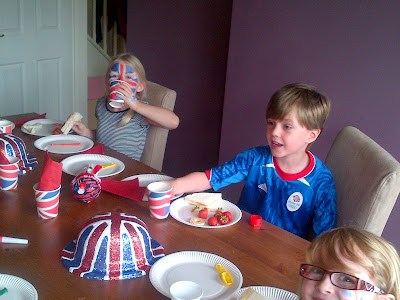 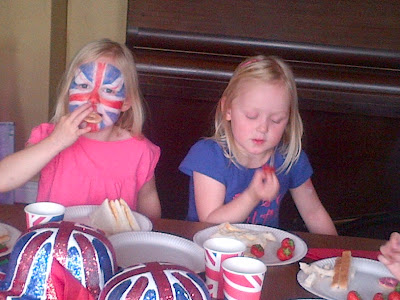 To finish things off we held some indoor party games.

Belly burst ( using a balloon and separating the kids into pairs, the first team to burst their balloon using only their belly's and NO hands wins) 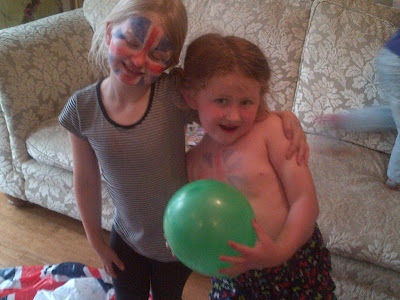 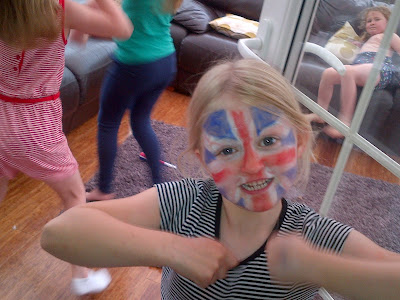 We finished the party by presenting all our participants with their very own gold medal! 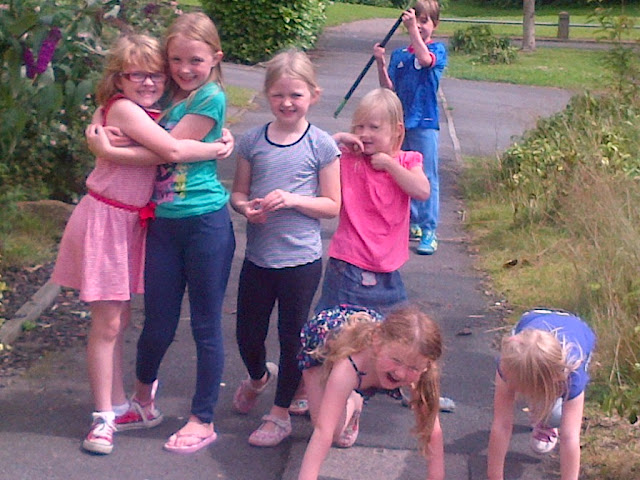 Phew! It has been a rather busy first week to the summer holidays in the Bold house.  We spent days out at the beach in Southport, train rides to Liverpool, visits to museums, picnics, birthday parties and sleepovers at Nanny's house.  So when I came home on Thursday evening after a two hour seven mile walk (I'm training for a 26 mile charity walk) the last thing I needed was to be told we were off to Centre Parcs and I had less than twelve hours to get some shut eye and pack for SIX  yes SIX people! 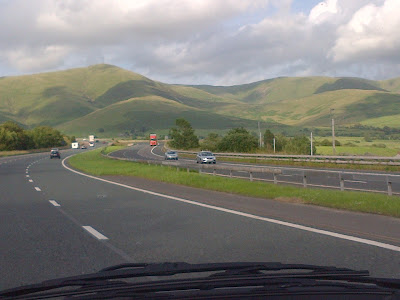 needless to say I was less than impressed but with four, hyper, excited little girls to peel off the ceiling and get to bed not to mention all that packing and organising, I had to grin and bare it.  Mr Bold is rather prone to impromptu spontaneity so I shouldn't have been so surprised and as we haven't been on a proper holiday in nearly three years I wanted to make the most of our last minute weekend trip to Center Parcs. 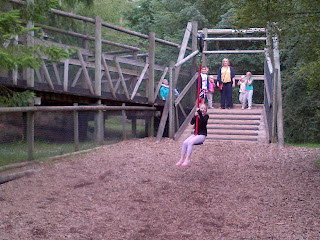 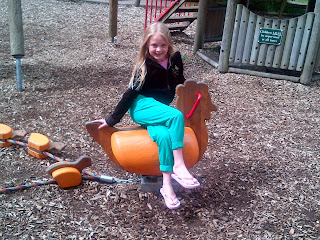 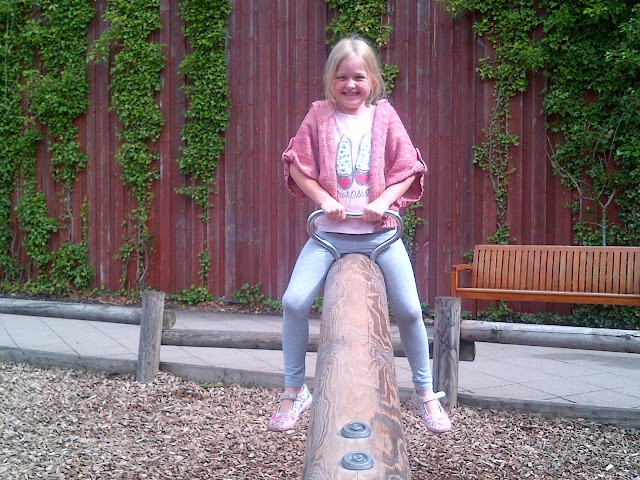 We set off for Whinfell Forrest on Friday enjoying the beautiful views along the way and as we were sharing with friends, to split the cost, we opted for a more plush woodland lodge which was amazing, we even had our very own infrared physiotherm room. The girls had a ball In the adventure play parks and couldn't get enough of the zip wire, I even had a go too.  But by far the best time spent was in the oasis swimming pools...... 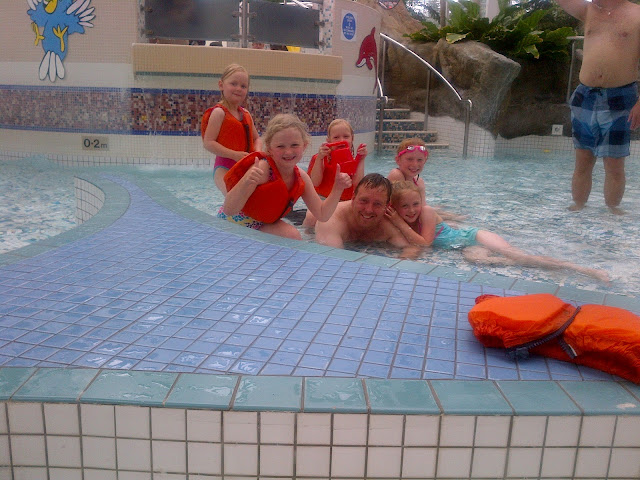 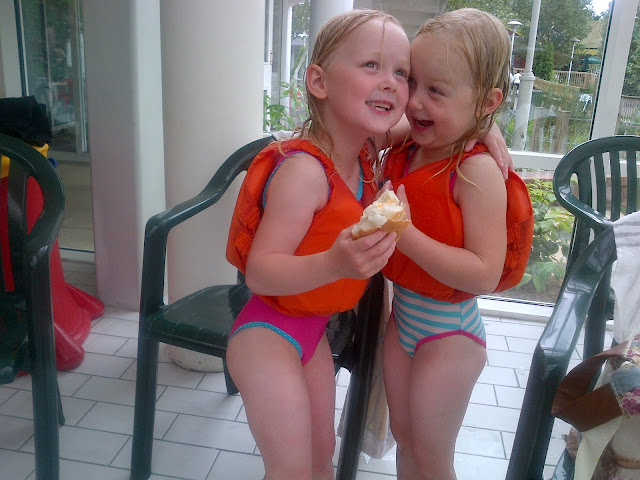 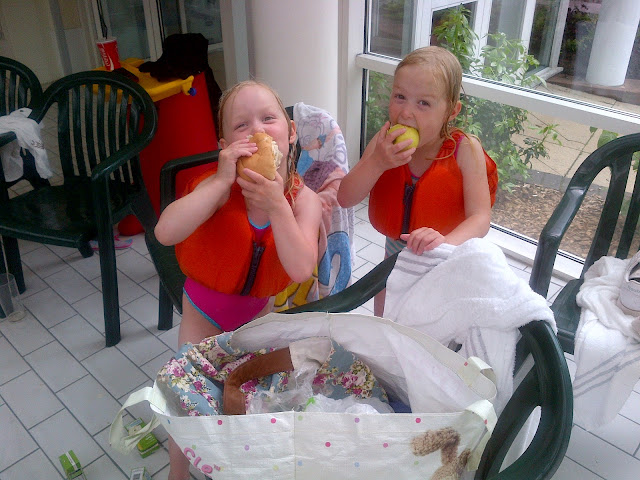 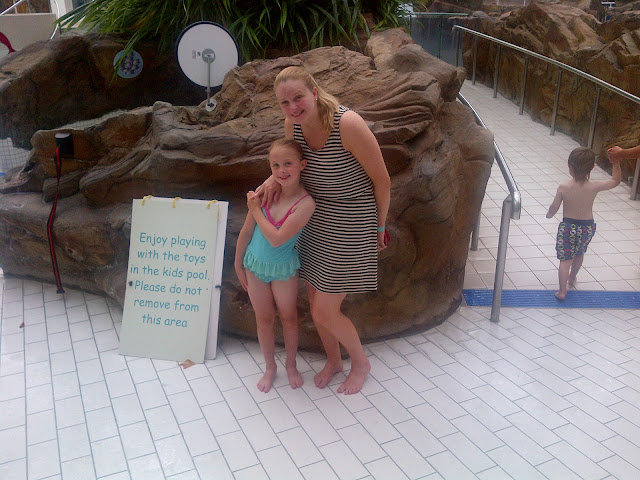 We had a fantastic weekend. The girls thoroughly enjoyed themselves, Mr Bold chilled with a few beers and I was treated to a trip to the spa as well. We loved spending quality time together and it really has made all the difference.  We can't wait for our next trip to Center Parcs and are already looking to book again for more family fun!
Posted by The wife of bold at 08:00 No comments:

Struggling to keep the kids entertained in the rain? Why not get creative and play pizza parlour, making your very own cardboard pizza.  The girls loved this craft but be warned it can get a little messy, luckily for me I'm not  a clean freak. 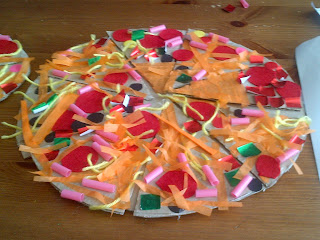 We had a few large cardboard boxes discarded around the house that I had been saving for a rainy day and we just raided the cupboards and craft box for anything we could use that resembled toppings. Pink straws were snipped to become ham strips, black paper cut in circles for olives, orange tissue paper stripped for grated cheese, yellow string for more cheese, red and green shiny paper used as peppers and red felt for peperoni! 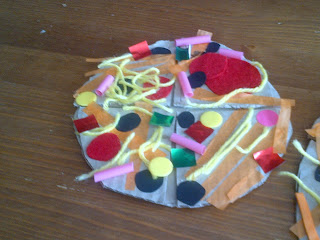 The girls enjoyed being inventive and getting messy and then spent the rest of the day playing cafe with their creations  - success! Now what to do for the remainder of the summer holidays that is just as budget friendly?
Posted by The wife of bold at 01:54 1 comment:

Thanks to the lovely Susanna and Co over at Brit Mums my girls were sent a large box of Rice Krispies and a fabulous colouring case packed full with all sorts of magic markers, glitter glues, pens and pencils to decorate and personalise their very own breakfast box.  As you can imagine they were all super excited to get creative and once I mentioned the possibility of winning five hundred pounds money mad Mia got all competitive too!! 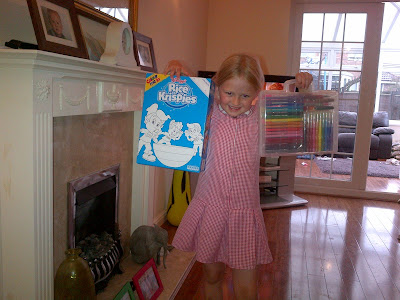 And after a very artistic, fun and surprisingly quite afternoon here is Eva with the finished product..... 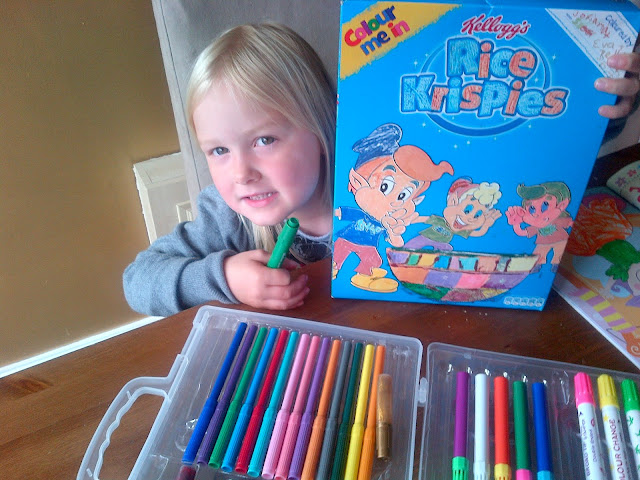 I know I'm biased but I think they've all done an amazing job!

All four girls love their new colouring case, especially the magic markers, and with over 58 different pens for them to choose from I'm sure it will buy me many more hours of peace and quiet over the summer holidays.....well a mum can hope right? 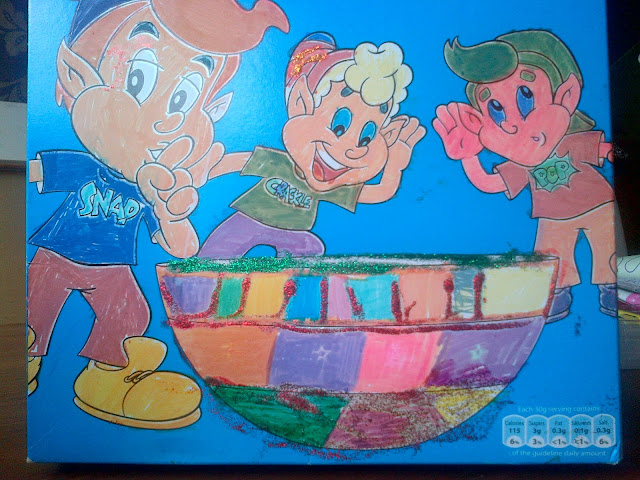