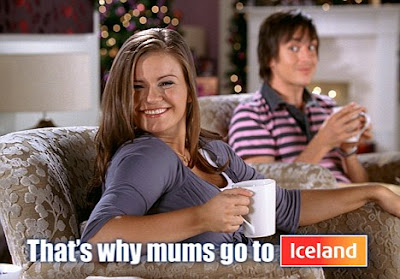 OK so I'm feeling a little temperamental of late, my kids are driving me insane and yesterday i had to go for my dread smear which was just awful (I'd put it off for four years so i HAD to go), but what i didn't need was a trip to the ch av capital of supermarkets, I'm visibly shaken now.

There's a reason why Kerry Katona is the face of Iceland and I'm surprised they have revoked her contract given their clientele i have just had a brush with wouldn't bat an eyelid over a bit of drug use! I do apologise if any of you happen to frequent Iceland, I'm speaking purely from my experience at the local store.

This morning i carted all the kids off to nursery for three whole hours of "mummy" time and i had to fit in tidying my germ infested hole of a house along with a bit of grocery shopping. As the nursery is just around the corner form a retail park i made a quick dash around Aldi, see I'm not a snob, i love a bargain and you can't beat their "Super six" offer. After loading all my shopping into the boot i realised i hadn't purchased any quorn mince for tonight's Cottage pie, so as Iceland was on the same retail site i thought I'd pop in to get some. Big mistake, huge...oh my what an eye opener!

They have FOUR freezers dedicated to pizza's alone, which says it all really and only a tiny fridge area with fresh produce. The staff were hardly trained in customer care and most of them were busy gossiping or using their mobile phone! I finally found the quorn mince in the last isle and made a mad dash for the till only for some very rude old guy to grunt and walk straight in front off me, not only that but some greasy haired, overweight smelly twenty year old girl barged right into me from my side and cut in line too!!!! The cheek!!!!

I'm not one for confrontation but i bit my tongue for fear of reprisals, these people have no manners and the last thing i need right now is a black eye. So everyone be warned venture to Iceland at your own peril!
Posted by The wife of bold at 06:13