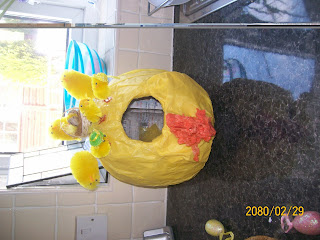 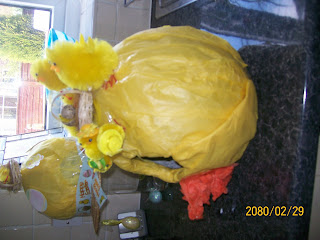 As promised this is the pic of mimi's easter bonnet - and would you adam and eve it she WON! Well admittedly i did do most of it but still i'm so proud of her and she's pleased as punch. Not wanting to sound too much like a competitive mum (sod it i am ha) she had it in the bag, there was never any doubt and after checking out the competition she won by a mile:)

How sad my life has become, i'm reduced to taking pleasure from a four year olds bonnet parade. Unfortunately my diets gone out of the window, i decided to celebrate with a cadburys cream egg which lead to three and then there was no stopping me, i had half a packet of rich tea followed by a rocky bar and a packet of wotsits. I couldn't help myself and now i'm back to square one so it looks like i won't be any lighter after all for my trip to Spain .... well maybe next week:)