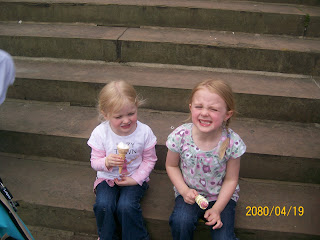 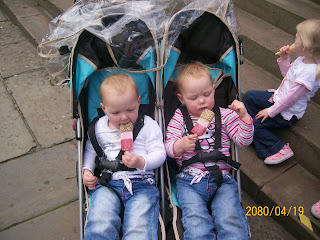 We had a great day today at the walker art gallery in Liverpool. Firstly there was the train ride which is always a treat for the big girls, unfortunately the joys of public transport are lost on me. We arrived to meet my cousin and her 18 month old little girl and i was pleasantly surprised at the abundance of activities on offer for the little ones. They had a whole room designated to children with a craft station, dressing up corner, puppet section and lots of computers, puzzles and books, the twins (who i was worried would be a little too young) had a ball. Upstairs in the gallery was another activity station where the big girls got to make their very own photo frame and i even managed to treat myself to a hot chocolate, complete with cream and marshmallows, i even finished it before it went cold, but the best bit was that everything bar the hot choccy was FREE!

After taking a break for a spot of lunch we then headed to the world museum which to be honest was a bit of a let down and a lot of hassle to navigate with a twin stroller and a three and four year old in tow. The highlight of the afternoon was when Fi fondled a roman statue:

After me and my cousin had composed ourselves and wiped the tears of laughter away, we quickly vacated the building to treat ourselves to some well deserved ice cream from the van outside.

On the train ride home, exhausted and feeling rather pleased with myself that the museum had been a hit with the girls, Fifi announces to the whole train that Mimi had just said "sexy." A little flustered i told mi not to say such a word, when fi shouts again:

"But mummy she said a swear word, she said sex again."

Kids have a habit of bringing you back down to earth with a bang don't they? I did get a few glances but believe me they have said much worse in public, so again i think that overall the day was a success!
Posted by The wife of bold at 12:28